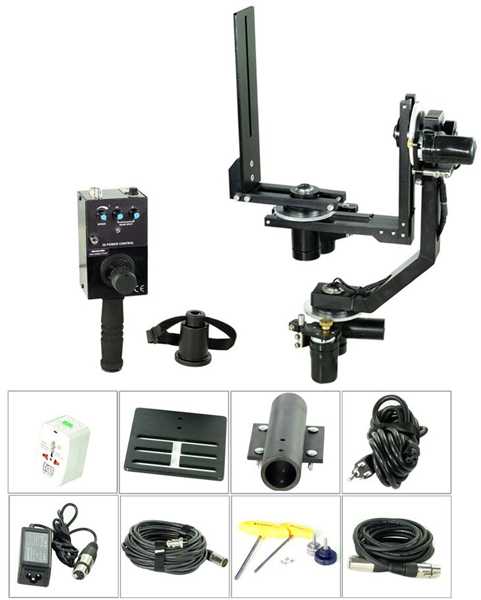 The PROAIM introduces its Spin-3 (3-Axis) Motorized Camera Pan Tilt & Dutch Roll Head that offers 360-degree panning, tilting, and rolling ability while keeping your camera safe and secure. It is exceptionally engineered crane h ead to support cameras up to 15kg/ 33lb with ease. It features high-torque DC motors and a controller that provides smooth and accurate proportional joystick control. Creative flexibility is a built-in component as the Pan Tilt & Dutch Roll head can also be used with jib crane arms, tripods and in other remote operating situations that dictate increased production value. Basically, anywhere you want to place a camera and operate it from a remote position, Proaim Spin 3-axis Motorized Camera Head will accommodate.

"WHAT YOU SEE IS WHAT YOU GET"

The technologically advanced 3-Axis pan tilt head is constructed from high grade aluminium that lets you to use it successfully for years to come. The pan & tilt movements are controlled by 12V joystick controller.

Dead Spot controls the sensitivity of the joystick on the pan tilt head. When turned on, there will be no motion on the 3-axis head up to particular area on the joystick which prevents the unwanted movements and gives you a better control.

Damping control prevents the head from stopping with a jerk enabling you to achieve smooth endings.

You can reverse the panning & tilting direction as & when required.